In this list, we'll go over 5 of the most ESSENTIAL plugins for video editors in 2022 - 2023! Theses tools are certain to help you produce higher quality videos in less time on DaVinci Resolve 17 and beyond! 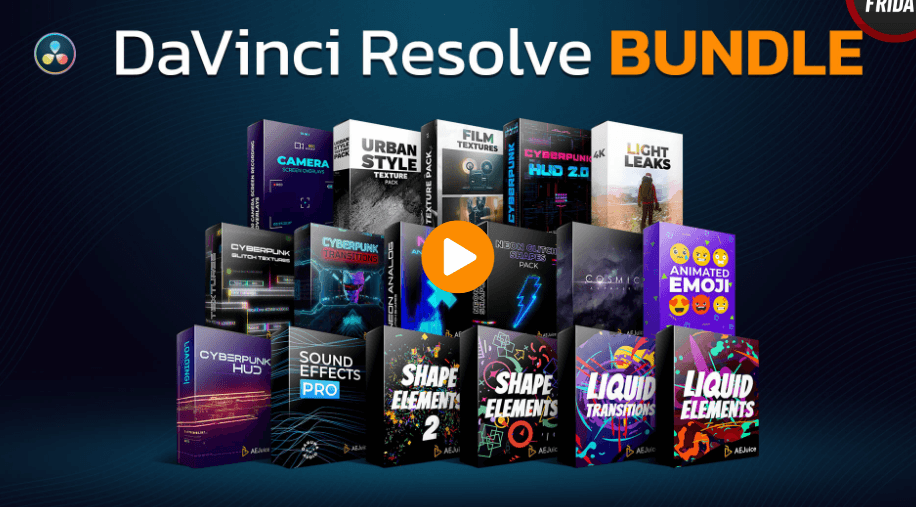 In a world abundant with plugins and templates, every single video editor is competing to create the most eye-catching and complex visuals. It’s almost guaranteed that your favorite filmmaker isn’t using the default effects that find in DaVinci Resolve. This is because plugins, scripts, extensions and other types of add-ons open up a whole world of possibilities regardless of your past experience and video skills. In this article, we'll go over some of the best plugins for DaVinci that greatly expand upon the native effects and tools. We suggest using these plugins as they help to take your productions to the next level, some of which include AEJuice, Cine Punch and more!

What Are The Best Plugins For DaVinci Resolve?

The AEJuice Davinci Resolve bundle is one of the best plugins available for video editors today. It includes plenty of smaller pack combined into one to help you edit better quality videos faster. The AEJuice bundle also comes in a pack manger which allows you to easily drag and drop any effect you like straight into the timeline. With its vast feature set and powerful effects, it is clear why it is such a hit. For those looking for a good Davinci plugin for a low price, the AEJuice Davinci Resolve bundle is a no-brainer.

For professional producers on a tighter budget, Motion VFX offers several free plugins for Davinci Resolve. Their plugins are incredibly powerful with limitless potential for design.

NitroZME has done it again with another VideoHive bestseller! But this time it's with an extension for Davinci Resolve!

Keynote by Motion VFX is a collaboration pack made with iJustine. This pack includes several text, transitions, overlay and motion graphic elements inspired by Apple's design and animation style. Motion VFX also offers several free plugins such as the 'M Hello DV' which is one of many available for free download on their website.

This template pack consists of several fully animated titles which are fully resizable to any resolution.

This Davinci Resolve bundle is made by AEJuice - a popular After Effects plugin developer with millions of users worldwide. With this particular plugin, you can create all sorts of effects for VHS styling, mograph animations and more!

With over 2000 downloads in just a few months after it's release. This effect bundle by yura_fresh will always be one of the most helpful plugins for Davinci Resolve, regardless of the type of video you produce. The creators of this pack frequently update it unlike other plugins. In the most recent V6 update, they've added 100s of new overlay effects and animations including infographics, lower thirds and transitions.